This is the second part of the "Build versus Buy" series of white papers.

Companies struggle with the idea of build versus buy all the time. Sometimes, the correct answer is abundantly obvious. Very few firms would choose to try to build their own phone systems or perform their own electrical work. However, when it comes to other types of systems, such as Commercial Real Estate Systems, firms consider doing exactly that.

This white paper explores the strategic differences between going with an internally built system and SaaS solution:

If you are Blackstone, or backed by a billionaire, and you want total control, an internal build absolutely makes sense. Internal teams can be told every single day exactly what to build, and you can set 100% of the roadmap.

See previous White Paper – Build vs Buy Part 1. Rockport (as is typical for a SaaS) prices so that its annual license fees represent approx. 1/2 of a 1% Percent (0.005) of the cost to build an equivalent system. Said differently – it costs you 200x more to build a Rockport equivalent system than to rent it for a year!

A lender makes its profit off its loans. A SaaS provider makes its profit off its platform. As a result, a SaaS provider is incredibly motivated to make the best possible product and spare absolutely no expense. The more money that a SaaS provider puts into its product, the more dominant it will become and the more its market share will grow. Given that a SaaS business’s economics are not dissimilar to building a building (large upfront cost, profit shows up years later), this means the #1 provider in each segment dominates all others. Google, Facebook, AWS, YouTube, etc are perfect examples. Internal development has no such leverage. As a result, over any reasonable period of time, a SaaS system will dramatically out-invest an internal development.

Socrates is quoted as saying “I am the wisest man alive, for I know one thing, and that is that I know nothing”. Perspective is a very powerful thing. If we were to describe something (a car, a cell phone, whatever) to someone who has never seen it before, and we described it only from one direction, it would be incredibly limiting. What about how it looks from a different angle? What about from above? What about from below? SaaS companies have the blessing of being pushed by a large number of clients about what they do and don’t like in the platform. While this exercise can be tiring, it is incredibly valuable. It means that a SaaS comes to understand a market’s nuances (e.g. CRE data structures) from the perspective of every market's participants. Internal systems simply are not forced to take such a nuanced/detailed look. As a result, the designs and architectures of a SaaS are simply more resilient, and more likely to be correct.

SaaS systems have hundreds of thousands of hours of development, testing, and iteration. They also have hundreds of thousands of hours of user usage across a very large client base. Most market leaders (like Rockport) have been through multiple real estate cycles, and throughout those times serviced very demanding, best-in-class businesses. These type firms do not accept imperfect products. This battle testing makes these platforms rock solid. The alternative is to gamble and try internal development. This gamble is basically that the internal tech team will make a nearly perfect product on its very first try. This is analogous to betting that you will throw a perfect game in your first outing of the season. Not a high probability bet.

SaaS systems have hundreds of thousands of hours of development, testing, and iteration. They also have hundreds of thousands of hours of user usage across a very large client base. Most market leaders (like Rockport) have been through multiple real estate cycles, and throughout those times serviced very demanding best-in-class businesses. These types of firms do not accept imperfect products. This battle testing makes these platforms rock solid. The alternative is to gamble and try internal development. This gamble is basically that the internal tech team will make a nearly perfect product on its very first try. This is analogous to betting that you will throw a perfect game in your first outing of the season. Not a high probability bet.

Rockport's Management, Product Managers, Client Success Team, Analysts, and Developers all know both technology and real estate. The majority have worked on the business side of CRE, and the others have been exhaustively trained. This integrated knowledge tends to be much stronger than internal IT where there tend to be people who know real estate and other people who know tech. No matter what the industry, someone who understands the end-user and their daily concerns will develop a far more useable system than someone who does not have the same domain-specific knowledge. Internal teams potentially can be staffed with dual skillset personnel, 9 out of 10 times they are not because this caliber of employee is better assigned to projects that have a higher revenue generation ability. Infrastructure rarely justifies this. The difference is for the SaaS system, it is revenue-generating, not infrastructure – so the SaaS system puts its best on it.

Internal IT typically is tasked with maintaining, improving, and building several different applications for several different divisions. A SaaS has one and only one focus – improving its system. This singular focus leads to faster and better results because of a lack of distractions, and a lack of fire drills from other departments. If internal IT is completely dedicated to the application, then typically this single focus comes with significant costs which makes it far more costly than Rockport.

Assembly lines, interchangeable parts, economies of scale, etc. all point to the basic premise which has been proven time and time again - a company that dedicates its focus will build a better, cheaper, and more sustainable product than a company that tries to do a one-off development. No rational individual decides to design, spec, and build their own car from scratch.

Systems must continually evolve. The financial industry continues to change rapidly and systems need to constantly react. Technologies, best practices, security, and compliance also change. If done internally every one of these evolutionary steps is costly internal work. The problem is that over time with an internal system, the company gets tired of the constant investment (and/or a recession happens) and it tightens the budget. As soon as this happens - the system stagnates.

Rockport adds millions of dollars of R&D every single year. Rain or shine, a SaaS keeps investing. This means every year clients get dozens of features, value adds, and new expansions. Without lifting a finger. Without spending a dime. With internal systems, each and every feature or improvement is work and costs money.

Acting as a Subject Matter Expert, participating in Product Roadmap planning, performing User Acceptance Testing, educating the developers on CRE topics, performing training or support for your coworkers, etc are all time-intensive tasks that pull talented business resources away from their day to day jobs (which produce profitability). In system development cycles, these intangibles can take as much or more time than the actual development itself. If the project is done internally, all of these roles need to be filled by people who have day jobs. The opportunity cost of this can really add up.

If an internal system is built by one person or a small team (the only way to do it with any cost-consciousness involved), then the Key Person Risk is huge. If that person(s) leaves or is transferred to another division or project all their experience goes with them. There are many examples of this occurring with internal systems. Each time, the impact on the system's ability to continue to evolve is devastating (the new people brought in have to relearn the system from scratch). Sometimes, it even causes the collapse of the entire process and the eventual removal of the system. This is why Rockport cross-trains all of its employees such that it does not have the same key person risk. Additionally, by focusing relentlessly on employee satisfaction, Rockport has an incredibly high retention rate (our product people are our revenue creators).

If you are planning on starting an internal build now, consider the following – Rockport has a 16-year head start PLUS all the advantages noted above. It just doesn’t make sense. Call us instead.

The Final Score for whether SaaS or Internal Development wins on each Strategic Point is as follows: 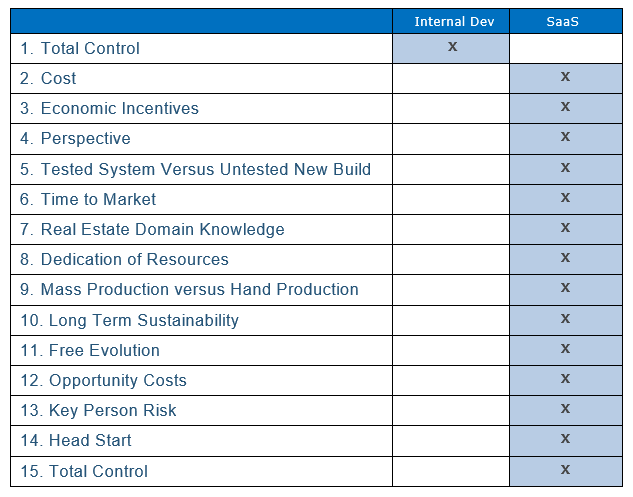 At its most basic, firms must decide what they consider their core competencies and should pursue those relentlessly and outsource the rest. In the 90s or even 2000s, this strategy wasn’t understood. The economy has changed. Today we outsource everything humanly possible. The time to market (or time savings in our personal lives) of these third-party-provided services simply dominate in almost every instance. That is true in CRE systems as well.

Focus on what makes you money. Don’t reinvent the wheel. As a lender, you make profit by doing loans, not building technological infrastructure.